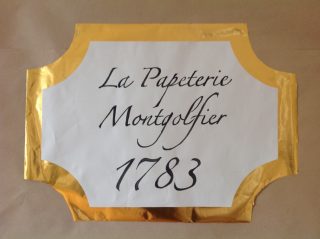 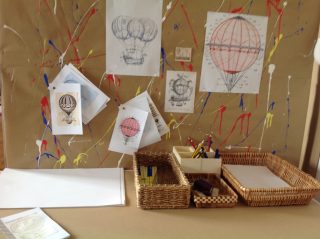 It’s very exciting to be working at the paper mill in Annonay, France in the year 1783.  It is called ‘La Papeterie Montgolfier’.  Every morning we must stamp our cards so that we can be paid the right amount of money at the end of each week.  This week, everyone working at ‘La Papeterie’ has also had their portraits done and these will soon be displayed in the Montgolfier office. The Montgolfier brothers run the paper mill and dream of travelling as high as the clouds, so when they are not running the mill, they are working on inventing some kind of flying machines. We have been doing some of our own designs too and are learning more and more about how to make different sorts of paper.

The Montgolfier paper mill has been hard at work making recycled handmade paper. We collected lots of old scrap paper and tore/cut it into small pieces. After that, we soaked it in hot water for a few hours. In 1783, they did not have electricity, but we were able to make it turn into a pulp much quicker by using a ‘hand blender’. The pulp was very watery and we used a sieve or squeezed it with our hands to let out some of the water.

After that, we placed some paper pulp onto some parchment paper and flattened it with a rolling pin. After 7 days, the paper is now beginning to dry! We now have a special paper making frame, so we will be making some more using this method.

An important meeting was held by the Jacques-Etienne Montgolfier. They were very

impressed with our balloon designs. At this meeting, we were told that we had been specially selected to repair a tear in the balloon.  Everyone who wished to be part of this team signed an agreement. Team badges have been made so everyone knows who is working on the balloon.

W/c 3rd May 2021
The specialist hot air balloon designers have been selected by the Montgolfier brothers from their employees at the family paper mill. Any mill worker who has shown a flair for paper making and aeronautical design has now been invited to join the Skychasers team.
The newly formed team were put straight to work making the next hot air balloon to be tested. 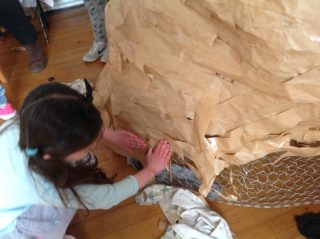 A conversation was overheard between the brothers, where they discussed the possible reasons for the unsuccessful previous test flight when the balloon caught on fire. The brothers have asked the team to write an incident report and it has become clear that everyone believes that on that day it was too windy.

There are now many questions to be answered:
How can you tell what the weather is going to do?
We could make a windmill – it spins around in the wind
But did they have metal in 1783?
A weather balloon would have a string hanging which shows which way the wind is going and that can predict the weather. The way the wind is blowing shows what weather is coming.
W/c 10th May 2021
Skychasers are busy designing and making equipment to help test the wind conditions each day. They have advised the brothers to not test the next hot air balloon if it is too windy. Some of the ideas proposed so far include:
We could get something wet and if it catches the wind and dries it will show if it is windy.
We could pick some grass and let it go and see if it blows away.
But I’m not sure we should pick grass; it’s nature. We could have poles with flags on. We could see the wind blowing. If it’s not moving at all we know it’s a good day for the test.
The team all agreed that this last point was important. However, one of the specialists pointed out that in one day it can seem like there is little wind, but then there can be big gusts. Once the windsocks have been made, they will find a solution to this.
Alongside the development of the windsocks, the team are using their knowledge of paper and weaving to make a large basket to be suspended from the balloon to help Joseph-Michel Montgolfier achieve his dream of flying up in the air. 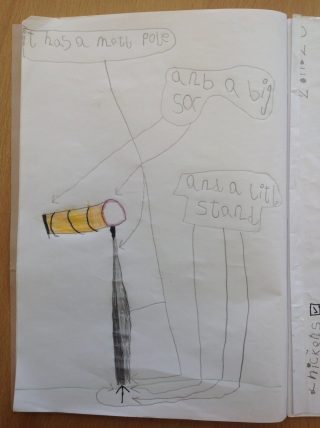 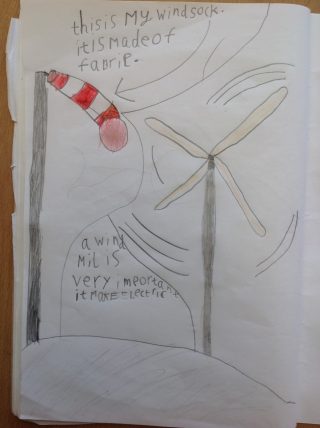 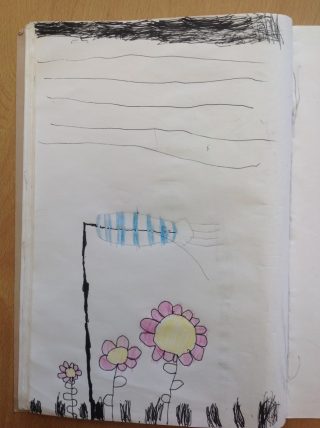 W/c 17th May 2021
The Montgolfier brothers have received a letter which they were keen to share with the Skychasers team. It is a request written on behalf of King Louis XVI that Skychasers bring their Globe Aerostatique to Versailles to entertain the King and his Queen, along with the King’s guests and important nobles. Most felt excited and happy to have received a letter from the King, if a bit nervous. Bruna and Bella were worried about the way the letter was written, as they felt that it was demanding rather than asking, and that we have no choice. They also noticed that the letter was written by the King’s scribe rather than the King himself. An adult went in role as King Louis, and they asked why he hadn’t written to Skychasers himself. His answer was quite dismissive; why would he bother himself to write when he had servants to do that for him?
The children then had the chance to investigate what life was like in France in 1783 for a mill worker and compare that to a noble living at Versaille. What a difference – peasants lived together with their family in one room dwellings, forced to eat grass as they couldn’t afford any grain to make bread, occasionally taking a bath in the nearby stream. While the nobles in Versailles were bathing in strawberries, with gold bathtubs and 750 rooms to choose from. In pairs, the children went into role as a French peasant or a rich noble and thought about a question to ask each other:
Peasant – Why can’t I eat enough food?
Noble – Because you don’t work hard enough!
Peasant – Why am I poor?
King Louis XVI – I don’t care!
Peasant – What do you eat?
King Louis XVI – I eat roast dinners every day
Peasant – I eat grass.
We then talked about how we felt about the letter from the King again, and feelings had changed. Some now felt annoyed and cross because the King didn’t care about the poor people and was telling us we had to visit the palace. 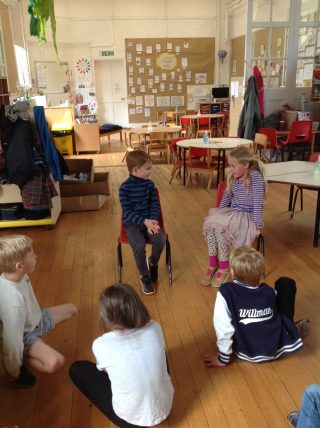 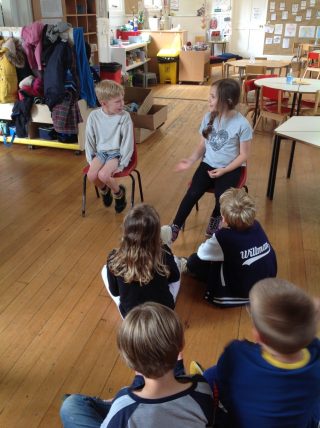 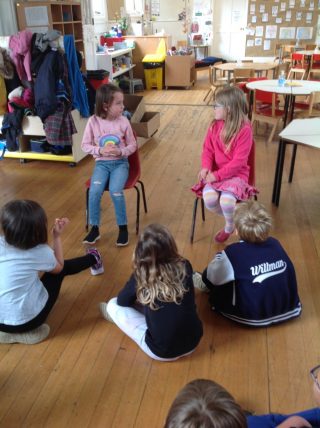 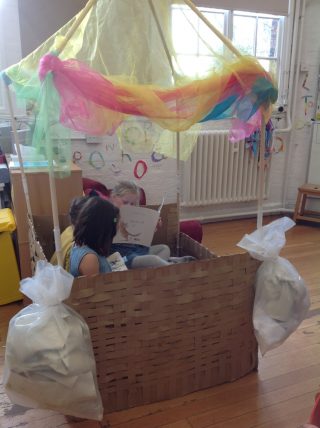 W/c 24th May 2021
The letter from the King was discussed during the mill workers Monday morning meeting, and a question that kept being asked was “Where is Versailles, and how can we get there?” None of the mill workers knew the answer, and so decided to write a letter to the merchants who supply the mill asking if they know. Luckily, a wood supplier who visited the mill the next day was happy to help and popped into the workshop to answer any questions. There wasn’t much time to prepare, but everyone managed to write one question that they felt was important. These included, “how long will it take to get to Versailles?” “Are there any dangerous animals?” “Are there any rivers?”

The wood supplier was able to share lots of information, and Skychasers now know that it will take them eight days to walk from Annonay to Versailles, to expect some wild animals en route, that there are large rivers, and the direction that they need to set off in. Some were keen that the merchant draw them a map, but they ran out of time. It was decided that the next thing for us to do is to draw a map of the route, showing all physical obstacles. We will make use of the technology available to us in 2021 to plot the journey using satellite images, identifying any forests, rivers and mountains.
Out of role, there was great excitement as we attempted to make our own hot air balloon fly with some bin bags and a hair dryer. Lots of discussion beforehand showed that the children were confident it would work:
“the hairdryer will make hot air” – Bodhi
“like the fire in the balloon” – Bella
“hot air will make the balloon go up” – Amalia
“the hot air will fill the balloon and push out the cold air” – Jacob
“it (the balloon) will go up because hot air is lighter” – Sienna
“but the basket might make it sink” – Bertie
Our first flight was a success! We then thought about what might make the balloon rise higher – maybe taking the basket off, or changing the weight of the animals in the basket, or holding the hair dryer under the balloon for longer. Each of these predictions was tested and discussed.