This week the children in years 5&6 have been exploring and co-constructing the company history of their shipping & logistics firm named “Shipping Ashore”. 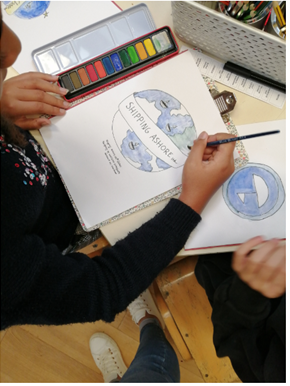 The week began with an overheard conversation.

Two company employees (Teachers in role) had seen and overheard the General Manager, Rashka Davies, on an international Zoom conference call with the company CEO and our other offices in Rio De Janeiro, New York, and Hamburg.

Were we going to listen in to the conversation? Some company members felt this was unprofessional and an invasion of privacy, while others felt it was vital to hear information if it was going to affect us.

Following the recent worldwide pandemic, the company is in trouble. Only one office can stay open. The team felt very strongly that it should be us, and are currently working on ways to present our views to the CEO when he visits next week…

With all our high-profile commissions and successful transportation of historical artefacts, surely it will be us?

This week, the team at Shipping Ashore have been examining their advertising and marketing. Following a company meeting with CEO Antonia Jessop (adult-in-role), it has been decided that in order to maximise custom and strengthen our position as industry leaders that our website will need to be relaunched. The team have been using computer program WIX to design a new webpage. 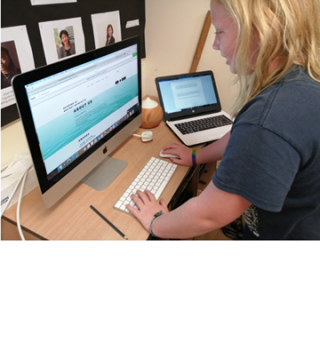 The office received a visit from the Sutton Hoo acquisitions officer Patricia Field (adult-in-role). She told us of a potential new customer. A private collector from Copenhagen, Denmark has approached the Heritage site and would like to ship the blade of a sword (thought to have belonged to Beowulf), back to England to be reunited with the hilt at Sutton Hoo.

The collector seems nervous, yet eager to be rid of the blade. We questioned why this might be.

Through the use of dramatic convention, we were able to observe our potential client.

We had spent time composing an email which was to persuade him that Shipping Ashore was the company to use in order to transport his blade, thought to be the missing tip of Beowulf’s sword.

At his home in Copenhagen, Klaus Hansen (adult in role) was seen reading the email. Pupils also observed him taking great care to ensure the blade was safely locked away. They were invited to build the narrative by imagining Klaus’s home and surroundings. 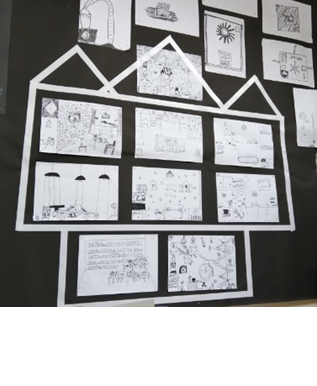 Questions emerged about this enigmatic collector, and his precious artefact. Children noted that he was using a rather complex system of locks and keys…

How did Klaus obtain the blade?

Why does he have to be so careful with it?

Could it be cursed?

How did the hilt get to Sutton Hoo?

Is there more than just a blade hidden behind the series of locks and keys?

We are keen to find out more.

We met with Klaus Hansen (Co-head Duncan in role) via an international Zoom conference call. 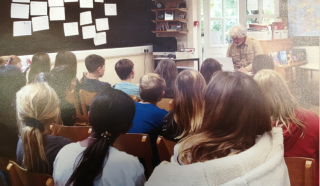 Whilst it became clear that Klaus had much to reveal, he explained his nervousness at communicating over the Internet. Later on, a discussion ensued; how much caution should we exercise over what we share online, even just verbally?

The meeting was somewhat frustrating, as we sensed that Klaus had much more he wanted to say. We explored the possibility of travelling in person to meet with Klaus and learn more, but with the Government currently advising against non-essential travel to Denmark this would not be possible.

Nonetheless, Shipping Ashore employees were able to answer our potential client’s questions. The job of transporting Beowulf’s blade to Sutton Hoo is ours and plans for its safe journey are underway.

We designed and began to make motorised models of some of our company’s fleet of lorries, trains, and vans. 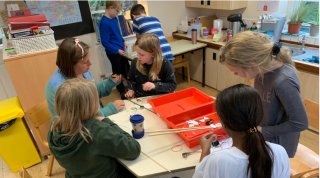 Preparations continue for the safe and timely deliver of Klaus Hansen’s collection, which allegedly includes the sword of Beowulf. In role as company members, we planned the route of the treasured cargo from Copenhagen to Felixstowe. We examined closely a map of Europe and considered the benefits of various routes, via land, sea and a combination of both. The process became more complex when we discovered that border checks and mandatory breaks for lorry drivers would also need to be factored in!

Design and production of the company fleet is nearing completion as pupils have worked with circuits to make the models motorised, some have even been incorporating lights and horns too! 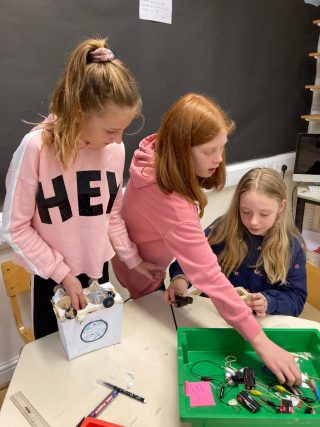 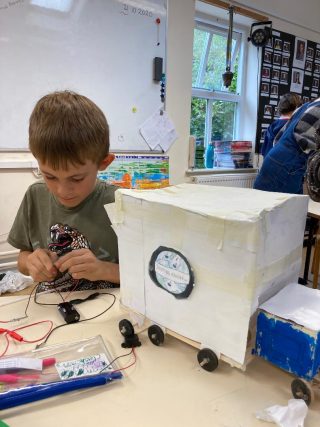 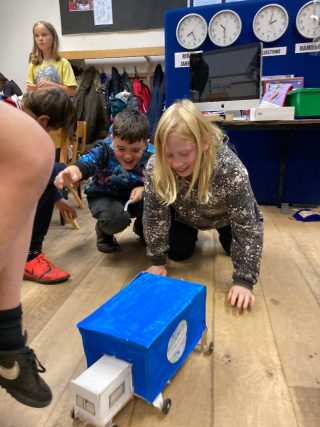