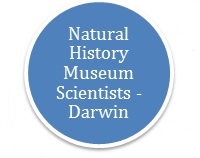 During the Easter break, pupils receive a press release from the National History Museum in London. It reads:

“We have today been informed by the Ecuadorean authorities that the search for the missing research science team has been called off, following two weeks of fruitless search and rescue efforts in the South Pacific Ocean.

Thirty-two of the country’s finest natural history scientists, who were sailing from Ecuador to the Galapagos Islands where they were to collect samples for our Darwin exhibition here in London, remain missing at sea following an unexpected and extreme weather event.

The profession mourns the loss of these esteemed colleagues, and we send our heartfelt condolences to their families at this difficult time.”

An accompanying letter from the teachers explains that unbeknown to anyone, we (the team) have managed to stay alive by drifting on a life raft at sea and have found ourselves washed ashore on an island. Pupils are asked to bring with them on the first day of term an item which they may have managed to keep with them, or an item found on the beach where they are washed up. Our first priority is clear: We need shelter.

Using the space outside the classroom, we spend time creating our camp. Using a mix of found and natural materials, the shelters emerge. Some begin to think about other elements of our survival and begin to fashion tripods for boiling water on, a spit roast, and a food storage area. The camp will continue to evolve and be adapted throughout the term as needed.

Out of role we begin to look at how classification and use this specialist information to create our employee profiles which detail our specialist areas and career highlights. The team is comprised of specialists in echinoderms, coelenterates and myriapods. There are also experts in Phoenicopterid and Delphinus, as well as Salientia!

Using dramatic convention, we wind back the clock to our arrival on the island. We imagine ourselves arriving at nightfall. We speak our thoughts. Many comment on their sensory experiences:

“I feel the soft warm sand between my toes… The soft buzz of the crickets tickles my ears…. My blistered and sunburnt skin is burning…”

“This is too good to be true… I look to the trees, thinking about where I can shelter… I feel fear even thought this seems like paradise…”

We fast forward to imagine ourselves alone in our shelters in the middle of the night, where many are left unable to sleep. Harry comments that he feels he is not alone and that he is being watched. Others speak of their exhaustion, and their fear. Some even question whether it would have been better to have drowned. Many comment upon the noises coming from the undergrowth which surrounds us. Using a Dictaphone, we create a soundscape of the sounds of the island at night.

We begin to map the Island, using our bodies and drawing around them to create the coast. Together, we are starting to construct our context as questions and observations about the island emerge:

Are we at risk? Whose were the fresh footprints in the sand when we arrived? What kind of island is this? Are we alone here? What is inside the cave? Are we being watched? Do we need weapons? Lookouts? How can we attract attention? Are there food sources here?

Out of role we explore perimeter and begin to think about how we might measure the scale of the Island. We also write newspaper articles detailing the disappearance of the team, and learn about tropical storms and how they are categorised.

With some of the class out completing their ‘Bikeability’ training, we work on establishing a timeline of events between leaving Ecuador and washing ashore on the Island. We create still images and short films of these moments.

Out of role we continue our work on classification; producing a large-scale chart which we will use for reference as we discover and collect animal species during our time on the Island. We

conduct research into Charles Darwin, and the significance of the Galapagos Islands.

Modifications to our shelters are ongoing. Spit-roasting equipment, clothes drying areas and a water boiling system are designed and constructed.

We complete our newspaper articles, following research into tropical storms and how they are formed and classified. Through this process we decide that the storm is named Grace, and it was of category 5!

During a camp meeting we discover that the harvesting of coconuts for hydration is no longer a sustainable option; we have almost run out of ripe ones. We share the remainder of the crop between us. While we do this, the ensuing discussion is centred around one thing: Where will we get our drinking water from now? The three main suggestions from team members are: Sea water, fresh water, and rainwater. 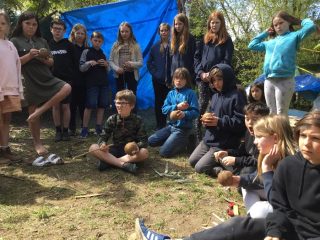 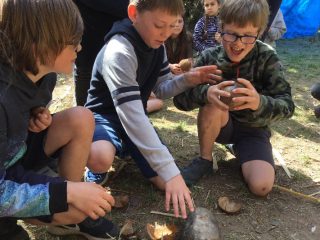 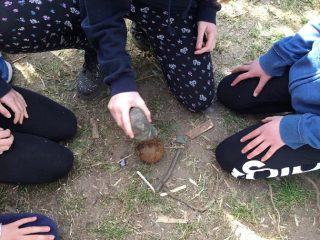 We conduct our planned experiments relating to our drinking water supply on the island, investigating the following questions raised by the team:

Can the salt be removed from sea water?

Can you filter fresh water and make it fit to drink? 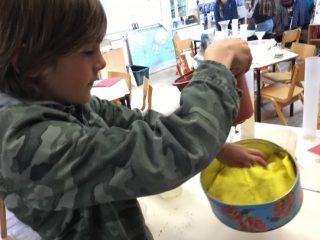 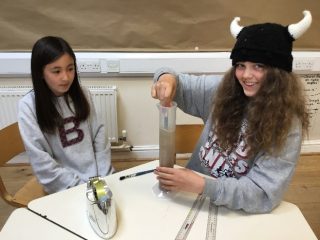 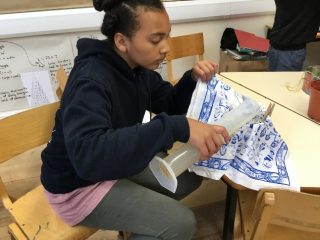 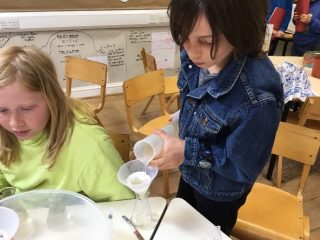 Once we have established a consistent drinking water source we can continue mapping and exploring the island. 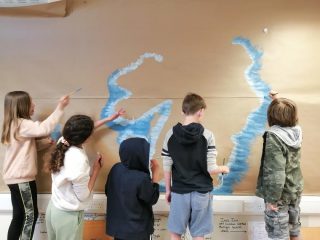 Having explored sea water and fresh water sources as drinking water we consider the third option: Rainwater. We design collection systems and decide upon the following success criteria: 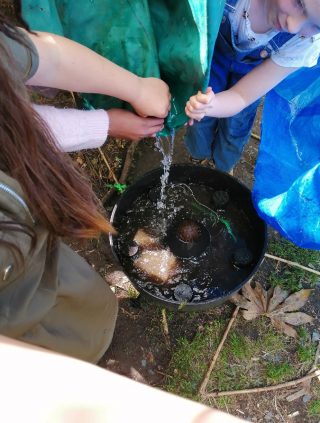 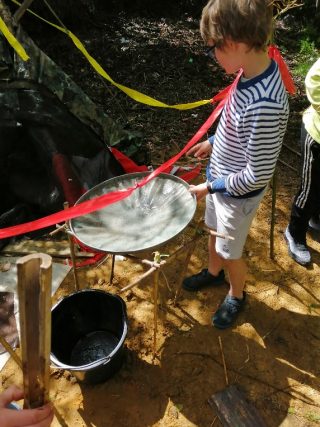 Later on, the team split to explore further and to note the topographical features of the land. Initial notes and sketches are made. We discuss the different landforms which might be found, and those which are unlikely to be found on a remote island in the South Pacific Ocean.

We look at live satellite images of the South Pacific and the Galapagos Islands, and use these as inspiration for our own visual representation of the island from above. 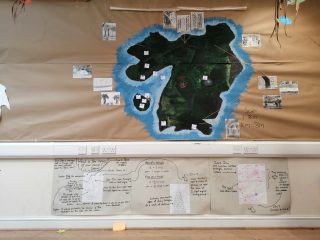 The rain over the weekend provides an ideal opportunity for us to evaluate our water collection devices against our agreed success criteria. We estimate and then go on to measure the volume of water collected by each device.

Our mapping continues when the team come together to share things they have noted in and around the camp. It would seem that things are being moved, or even disappearing completely. We are careful to plot this on the map, along with any other strange happenings or sightings such as footprints in the sand or the shipwreck which is revealed when the tide is out. 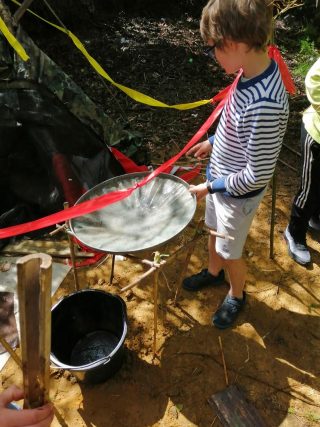 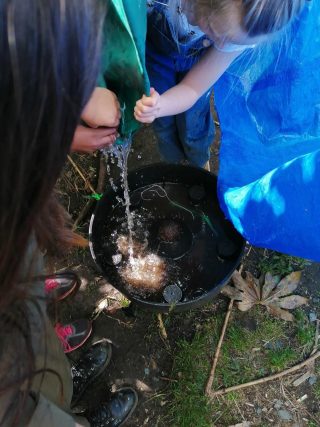 Further co-construction of our context happens when we share our observations of species we have noted on the island so far. We produce field drawings and notes on these species and are careful to include any adaptions we might have noted. Bessy has noted the presence of small rabbits on the island and is concerned when she researches this. She discovers that in the past, rabbits have been used to note the effects of nuclear testing in the South Pacific. Sophie considers the rice rats that she has seen. As an extinct species, she questions why they are thriving on the island.

We resolve to conduct further exploration, in the hope of finding answers to our questions.

Using our co-constructed map of the island, we learn about plotting co-ordinates within four quadrants.

We reflect on how long we have been on the island. With the time now running into weeks, we decide to plot where we have sighted various species so far and whether they have moved over the course of our time spent observing them. This leads us to investigate the concept of translation further. 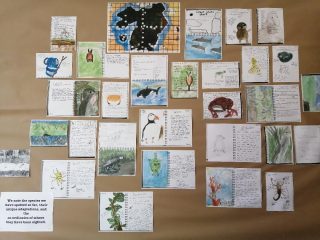 We also begin to consider once again where this island might be located. We use a world map to look at possible areas left unsearched by the Ecuadorean Search and rescue team.

During a camp meeting we discuss what food we are eating whilst on the island. Out of role, we consider whether it will be possible to be sustained nutritionally by what is available there.  This leads us to explore what our bodies need in order to survive, and where these nutrients can be found.

We use drama to demonstrate moments from our time on the island so far. Several strange happenings have occurred, such as missing tools or things being moved, and several of us have felt like we are being watched.

As we explore these moments, two main sightings of significance come to light. A young girl has been spotted, of around 10 years old, and appears to be spying on us. Another is the presence of a small robotic device, nestled in some trees not far from the camp. Many lines of enquiry emerge, as we consider what could be going on on this strange tropical island… 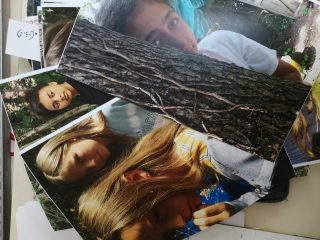 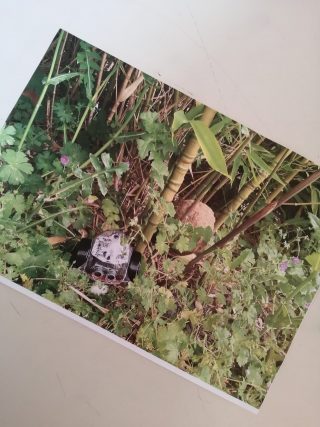 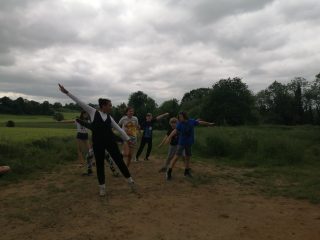 We also spend a day completing a dress rehearsal for our upcoming filming day for our Dance project, ‘Under Suffolk Skies’. We have been working alongside Samantha Moss, who is a professional choreographer, to create pieces inspired by the wildlife around us. We have been chosen to represent rooks and ivy in the film, which is an enterprise to will bring together several schools, youth, and community groups from the local area to create a film.